Well, I vanquished Silverwood today with a team of 3 warriors. I ran a Build that focused on Cultist’s Fervor [elite], Order of Pain, Dark Fury, and Blood Bond with PvE skills, regen, and condition removal to round it out. My warriors were as follows: 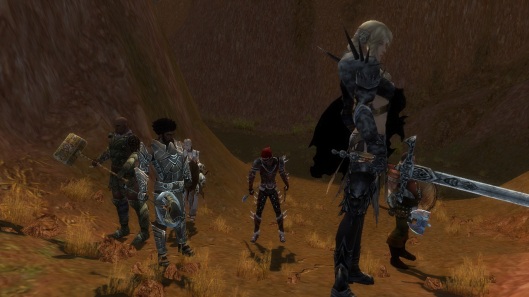 The warrior gang and me in my blood magic getup.

I have to say, I liked the builds, but they weren’t terribly effective in this situation. Silverwood is full of centaurs and mostly centaur warriors. Spells work great against warriors, not other warriors. In addition, I had to do a whole lot of targeting with these heroes since, as you might expect, they all wanted to rush in and attack the nearest target. This was great if that target needed a good butt whooping, but in most cases it allowed bad guys to approach the monk and me and cut us down in short order.

I got the rhythm down of sending Goren after the guys who came after me or after the meddlesome casters, letting knockdown do it’s job. Jora engaged the warriors one on one and had pretty high survivability with her riposte and blocking abilities. Koss pulled double duty with groups and all around damage dealing. Halfway through I wished I’d have brought more crippling capabilities.

It took twice as long as I expected to vanquish this area due to crappy healing/support (my fault) and bad pulls. Also, I may have been watching television at the time.

All in all I was happy with these warriors, but I think they are better to supplement a group that has some strong healing rather than as a fighting force by themselves. Maybe when we are able to outfit our entire parties with heroes I’ll group them with healing heroes and see how well they do.

As for dervishes, well, everything was going well until the dervish update. I had all 3 of my dervishes ready to go with builds from PvX wiki and watched them get cut down in HM since they were no longer balanced. I’m currently doing my research on the new update and will reskill my dervs and prolly reequip them as well. We’ll see what comes of them when I take them out into Mamnoon Lagoon and Sage Lands later on. 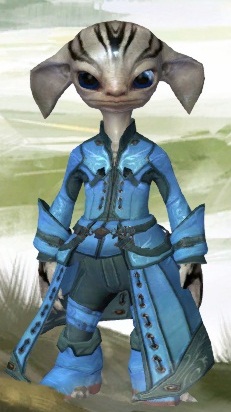