Secondborn sylvari whose charge is understanding the fauna of Tyria. At home in the water. Companion to many creatures. Wanderlust is strong in this one. 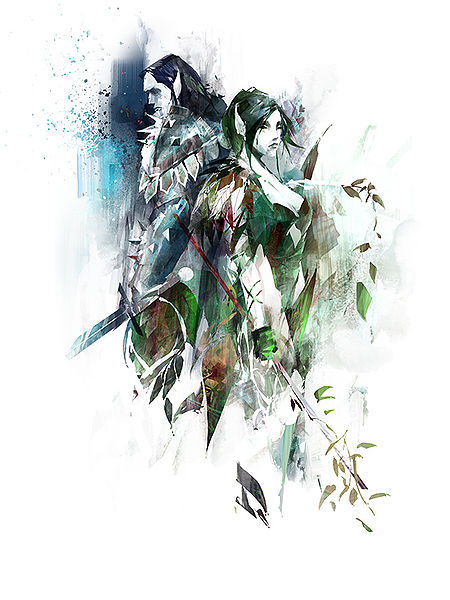 I dreamed of a quest that calls me to action. It was a vision of the The Green Huntsman. I saw a powerful huntsman in green armor, his face obscured by vines. He was defeated, but did not submit; was killed, but did not die. Dare I face him in battle? I believe that the most important of Ventari’s teachings is “All things have a right to grow.” The blossom is brother to the weed. Diversity of opinion is good. Discussion is healthy. No one should be condemned simply for being different. I will stand up for the rights of all. The Pale Tree awakened me during the Cycle of Dawn. Sylvari awakened at dawn are natural talkers, diplomats, and forward-thinkers. We are intimately connected with our surroundings and markedly empathic toward all, even other races. My pet Fern Mastiff fights at my side and guards my back. My dog has always stood by me, even against the most dangerous attackers. I couldn’t ask for a better friend and ally.

Builds (in order of preference):

Owain fell out of the Pale Tree and landed in the water. It took him a moment to realize he was no longer dreaming about swimming, but actually doing it himself. When he swam to the surface he was greeted by several sylvari and welcomed by one known as Aife.

Owain is a secondborn. Like several of the firstborn and more of the later-born sylvari, he was stricken with wanderlust. Unlike the others, he was particularly torn about this feeling. While he truly desired to explore the world and learn about new and interesting things to share with the Pale Tree and his brothers and sisters, he also felt the call to stay with the Pale Tree and care for her. To his surprise, a compromise was reached: Wort.

From the Pale Tree was born a canine creature who padded its ferny paws over to Owain and nuzzled his leg. Owain knew immediately that this would be his companion–a part of the Pale Tree herself–who would share in his travels. Owain named the fern mastiff “Wort” and set off to explore Tyria. He charged himself with finding, taming, and training all manner of animals and sharing his knowledge with his brothers, sisters, and mother.

While Owain considers many animals on land, underwater, and in the sky to be his companions, Wort is his true friend and his link to the Pale Tree. Wherever he goes, Wort is not far behind.

This is my story…